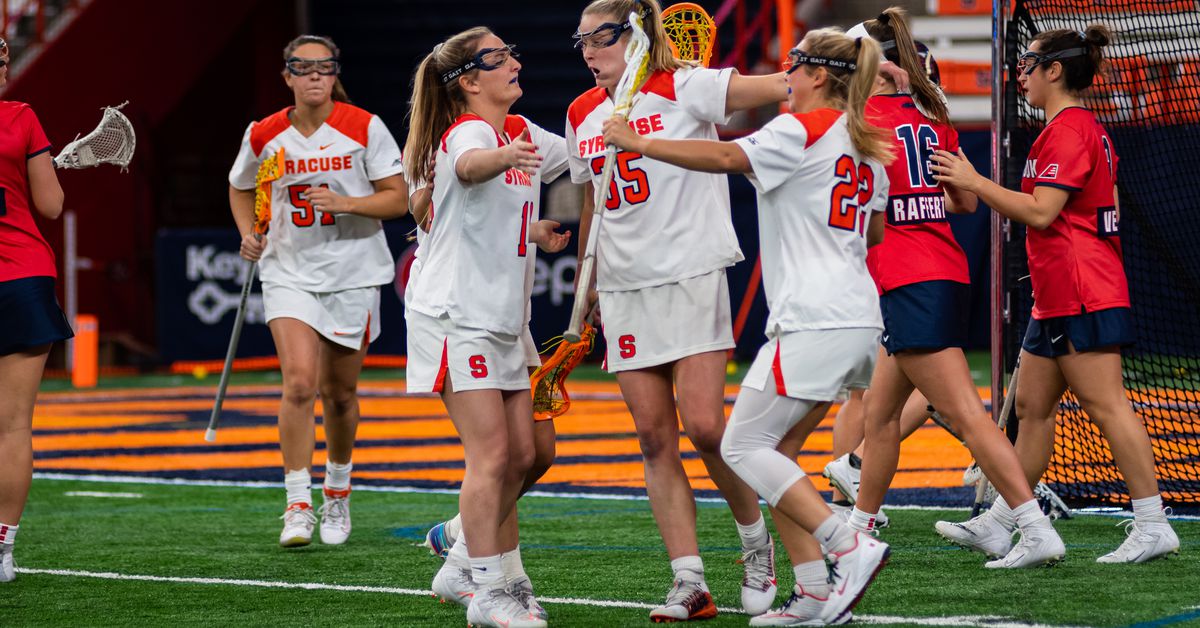 Heading into Sunday, all the concern was how the Syracuse Orange women’s lacrosse team would handle the end of the game after their recent fourth quarter struggles.

Turns out it was the start of the game that should have concerned us.

Down seven goals after a disastrous first quarter, the No. 3 Syracuse women’s lacrosse team came back strong in the final 45 minutes to complete an epic comeback over the No. 7 Duke, 18-16.

The day seemed to end quickly for ‘Cuse. After scoring the game’s first goal just over 30 seconds later, Duke took over. Orange could not earn a draw. They couldn’t stop. They could not send the ball to the attack. Duke scored eight, yes EIGHT, goals in a row to take control of the game. It was the very definition of do-it-yourself lacrosse for the Blue Devils. The SU defense couldn’t find a cutter in the middle to save their life, as every goal Duke scored was wide open and right in front of the net. It was 9-2 after the first quarter and things looked hopeless.

But credit all around this one, both to the players and the coaching staff. They made defensive adjustments that had a significant impact on turning the game around, they started to even out the draw checks, and the offense started the long comeback and eventually took over to preserve the win.

Trailing 9-2, Syracuse beat Duke 16-7 in the final three quarters of the game. It was an incredible comeback that proved once again how much fighting spirit and talent there is in this team. They are still a long way from playing a full match. If they can get close, we could finally start to see some truly stunning results for this team. But until then, an epic win against a top 10 Duke team is pretty, pretty, pretty good.

The comeback was led by all the usual suspects in attack. After a relatively slow first half, the Meg Show took over after the break. Meaghan Tyrell (5G, 1A) and Meg Carney (5G) each scored five goals, with Tyrrell scoring all of his in the second half. In total, eight of SU’s 10 second-half goals were scored by the Megs. Emily Hawryschuk had a good game with five points (2G, 3A), while Sam Swart (2G, 2A) and Emma Tyrell (2G, 2A) had four each. Tyrrell also added seven more critical on-game draw checks to help Orange fight back in the possession game against Maddie Jenner.

The Orange completely sleepwalked throughout the first quarter. They started well with a nice goal out of the weave on the first possession, but then it all fell apart. Duke scored the next eight goals of the game to take a decisive lead. Duke’s formula was simple: win the coin toss, score a totally uncontested goal just outside the goal. The draw controls and SU defense were disasters early on.

In the second quarter, the Orange picked up their game, leveling the draw checks and doing a better job (it would have been hard not to) of tightening up defensively. This combination allowed the ‘Cuse offense to see more of the ball, leading to four straight goals to start the quarter. The Blue Devils fought back and the teams traded goals until half-time, but a 6-3 quarter gave SU some life before the break from batting distance with a 12- 8.

The second half is where the Megs completely took over the scoring column. Emily Hawryschuk found Meaghan behind the net just ahead for the first goal of the half, and in the ensuing draw Sam Swart found her for his second goal in nine seconds. After Jalyn Jimerson scored a fine goal off a woman, Meaghan found the net on a great individual effort, using her speed to round her defender for a goal to level a 12 midway through the third.

Heading into the fourth quarter tied at 13, a nice lane control by Katie Goodale led to a Carney goal that gave the Oranges the lead in the first minute of the fourth for the first time in 34 seconds. Duke equalized a minute later, but the Megs combined for three straight games to push ‘Cuse ahead 17-14.

It momentarily looked like we were headed for another late game lead after Duke scored two in a row to bring it down to one. But a shot from Duke hit the post, then ricocheted Kimber Hower, who was getting his first start of the season and received no favors from his defense at the start of it. Hower recovered the deflection and the Orange regained possession.

After a timeout, SU played the last minute and a half perfectly wasting the entire shot clock and scored a goal on a fine connection from Hawryschuk to Swart with just four seconds left on the shot clock. It was perfect late-game execution when they needed it – exactly what we’ve been lacking in the last three games. That goal gave SU the massive two-goal lead with just 22 seconds left, and it ended up being the final margin of a crazy afternoon in the Carrier Dome.

The ladies are set to hit the road again for their next thriller when they travel to play upcoming Virginia Saturday, March 12 at 12 p.m. on ACC Network Extra.

Andersons Bay gets what it pays for