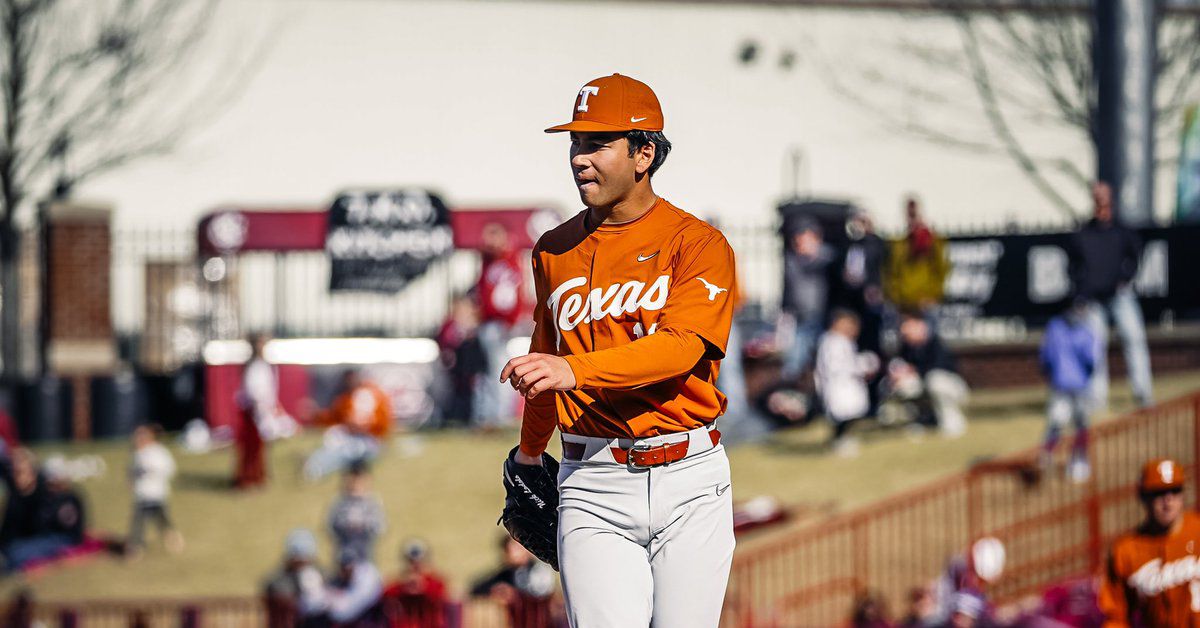 No. 1 Texas drops series to South Carolina with 9-4 loss in Game 2 doubles

Game two of the series-ending doubleheader at Columbia on Sunday was even worse than the first for the No. 1-ranked Texas Longhorns as the Longhorns couldn’t do anything and a disastrous fourth inning on the mound led to a 9 – 4 win for the South Carolina Gamecocks in the rubber game.

The less said about this one the better, so I’m taking the unusual step of giving you a tl; dr here at the start — first baseman Ivan Melendez hit another big home run to put Texas up 1-0 first.

South Carolina tied in the third, but southpaw Lucas Gordon still looked in control until the fourth, when a flurry of walks and singles led to fifth-place South Carolina. From there, it was all Gamecocks, as the Longhorns had just one hit until a game effort on an impossible comeback in the ninth.

For all the gluttons for punishment, more details follow.

Gordon started that fourth inning strong with one strikeout, but immediately gave up a walk. With an over and an over, he started Josiah Sightler with a 3-0 count, which, to Gordon’s credit, he came back to 3-2 before giving up a single to right field. That’s when Gordon gave way to right-hander Daniel Blair.

Blair immediately dropped a line single down the middle to Elijah Lambros to charge the bases, and started walking the go-ahead run. Shortstop Michael Braswell, who got the stoppage in Game 1 today, smoked a single down the middle to score two and Texas’ No. 1 ranking was starting to feel a bit fraudulent. Braylen Wimmer punctuated the sentiment with another line drive single to score another run, and South Carolina had four runs at home and only one away. Blair was done without going out.

The pitching change didn’t immediately end the nightmarish inning, as right-hander Coy Cobb gave up another single down the left side to Gamecock cleanup hitter Andrew Eyster. Third baseman Kevin Madden followed with a sacrifice fly to Eric Kennedy at left for a 6-1 lead. Cobb eventually ended the inning by retiring designated hitter Talmadge LeCroy — the same batter who batted out to start the inning five runs and two pitchers earlier.

Needing an answer, Texas had none. Freshman left-hander Matthew Becker continued to confuse the Longhorns as they dropped down the order to fifth. Cobb returned the favor down the frame against the South Carolina batters 7-8-9, who had been dangerous in the Gamecocks’ fourth-inning rally.

Dylan Campbell tied on balls to start Texas’ sixth half and immediately moved to second on wild pitch. This brought the top of the command to face Becker for the third time in the command, with a critical opportunity to put Texas back in the game. Center fielder Douglas Hodo III hit looking, fooled as Becker came in with a fastball as Hodo seemed to be expecting something average. Kennedy followed him hitting the swing. Melendez drew a four-length walk as Becker threw clear around him, bringing in receiver Silas Ardoin, who flew to the left to end what passed for a Longhorn threat.

Right-hander Zane Morehouse came out to start the sixth for Texas to face the top of the South Carolina order. First baseman/first batter Brandt Belk led off with a single and advanced to second on a wild pitch, but Morehouse came back to swing Braswell. Belk stole third as Morehouse walked with Wimmer to set up runners on the corners and more trouble for Texas.

With Eyster at the plate, Wimmer took second place in another indication of the team that took the lead today. Eyster rebounded a single down the middle to go up 8-1 and frankly, my decision to keep watching at that point should show you how much I care about the BON community.

Madden followed up his big day by muscle-up a bloop single on the handle and that was it for Morehouse. Right-hander Aaron Nixon came in to try and stop the bleeding. (Reader: He didn’t.) He walked his first batter on four pitches, then a slow roll at third scored South Carolina’s ninth run. Nixon got a strikeout to end the inning, but by then the Gamecocks had nine runs on 12 hits to Texas one run on one hit. An absolute beatdown however you cut it.

In a cruel twist of fate, Game 1 of the doubleheader — in which Texas could have used six more outs to keep hitting hard and hope for a breakthrough to overcome a two-run deficit — was a seven-inning affair while that This, which Texas would have been happy to finish after seven, was slated for a full nine.

Faltine at bat in the eighth was emblematic of how the Horns were just wide today, hitting on three swings. That Dylan Campbell followed him with a rocket straight to Madden for the second out was, frankly, a bit of a metaphor on the noses of the baseball gods. To the Longhorns’ credit, they fought back in the ninth inning, getting three runs and looking like a threat to make a run for the impossible until Faltine’s well-hit ball on the right just barely missed the perfect trajectory, going for a sack fly instead of a three-point homer which would have made things legitimately interesting.

Texas ends a week 2-3 and is 2-4 in its last six games after starting the season looking invincible. I’m not going to pump the sun and pretend that this weekend didn’t have any potentially worrying developments. Texas clearly has work to do to find a third replacement for Tanner Witt. The bullpen was less dominant than the staff’s 1.79 ERA would have indicated heading into the weekend. Failing to find timely hits in Game 1 was enough to give any longtime Texas baseball fan an unpleasant sense of deja vu. And finding virtually no hits in Game 2 was, obviously, even worse.

But it’s also a week in a very long season. Your eyes didn’t deceive you when it looked like Texas was a contender for Omaha. They still are; baseball is sometimes like that. Texas could have easily won Game 1 today, and then we’d talk about going on the road and taking two of three from an SEC team. But South Carolina dominated Texas that day. The sky is not falling on our heads, even if the team’s ranking is certain to drop this week.